Spiders on the Web

I can’t believe I’ve just spent an hour of my life looking at photos of spiders on the Web (no pun intended).

A few days ago, a co-worker showed me a photo of a huge, festering wound on a friend’s leg. The consensus is that she had a run-in with a brown recluse spider. (The photo shown below is enlarged for detail and willies-inducing effect. In real life, they’re about half this size.) 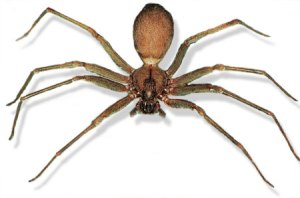 The image of that leg wound must have been lurking in my subconscious, because this morning I was a little freaked-out when a plain-looking—yet oddly ominous—spider skittered across the bathroom floor, right past my feet.

I trapped it underneath a glass for closer inspection. It sure looked like a brown recluse, with the notable exception of two disproportionately huge, shiny black fangs.

So I turned to The Internets for edification. I tried for an hour to find a photo that exactly matched my tiny brown captive, but came-up empty-handed.

I pondered my options. Should I just lift the glass and send the little bugger on his way? Or should I squish him to a pulp? I decided on a compromise, and found him a new home in the great outdoors. (I’m generally opposed to needlessly killing things. Even spiders.)

Along the way, though, I did learn some interesting facts that were mostly reassuring. For starters, brown recluses are, well, reclusive. They’re not likely to walk up to your bare feet. Unless they have rabies. (Kidding!)

For another thing, brown recluses are exceedingly uncommon in Minnesota. Mostly, they live in the south-central U.S.

And finally, I was reminded—once again—that the vast majority of the critters we fear are harmless to humans. Many are actually beneficial.

I wish more people would think about this instead of automatically flattening, poisoning, shooting, trapping, spraying, or otherwise obliterating some poor creature whose only fault was to show up. Living things are amazing—even when they have eight legs, six eyes and two pointy fangs.