Thank you for flying Zimbabwe Airlies

It’s not uncommon for police officers, SWAT teams, firefighters, hospitals, and even corporations to do disaster-preparedness drills.

This morning, its Aviation Ministry officials deliberately misinformed news organizations that a Boeing 767 arriving from London had been involved in an accident at the Harare airport. They then set a bunch of tires on fire for added effect. (I guess nothing draws the media quite like plumes of thick, black smoke.)

I understand that there’s value in running emergency drills. It gives officials and first responders a chance to gauge reaction times, pinpoint vulnerabilities, and fine-tune processes.

But what purpose does it serve to alert the media, and to trick them into publishing a lie? Imagine the anguish someone might feel if they were expecting a loved one’s arrival, and saw this photo instead: 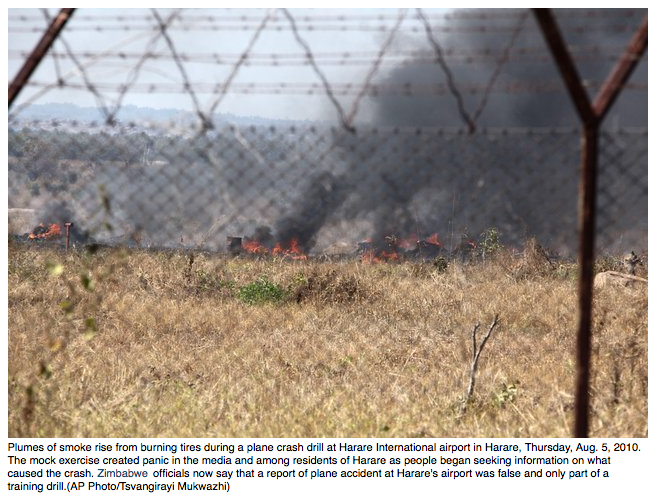 According to the Associated Press, it’s not the first time such an event has been staged.

In 2006, Kenyan officials told journalists that a passenger plane had crashed near a Nairobi airport with 80 people on board — but when reporters arrived, they found it had only been a practice drill. There was a similar scare at the Nairobi airport in 2002.”

Is it just me, or is this pointless and deceitful and just a little bit sick?