If you’re just tuning in: I’m in PARIS! What follows is a chronicle of my few days’ solo adventure.

I tried to sleep on the flight, but I dozed fitfully for only a couple of hours. I spent the rest of the time playing games on my phone, trying to jam my swollen feet back into my now-three-sizes-too-small boots, and talking to the guy next to me.

Before I knew it, we were on the ground. Just like that! What an amazing age we live in.

I hopped a cab to the hotel, and was surprised (thrilled, actually) to discover that my room was ready. I grabbed a shower and a desperately needed nap.

Along the way I paused for one of my first photos:

No sooner did the shutter go “snap,” than the vendor appeared. “Hey!” he shouted. “What about me?” So I turned and snapped his photo, too.

We exchanged pleasantries about his postcards and he bemoaned his lagging sales (“grâce a cette économie de merde,” as he delicately put it). I stepped in and bought some Mentos. “See what a good salesman I am?” he joked. Indeed.

I hopped on the train with no particular destination in mind. At random, I hopped back off at Bastille. I love that half-outdoor station, with its revolution-themed murals.

I thought I’d head for rue de la Roquette and visit some of the artists’ studios. But I got distracted and ended up meandering through some quaint, quiet side streets instead. 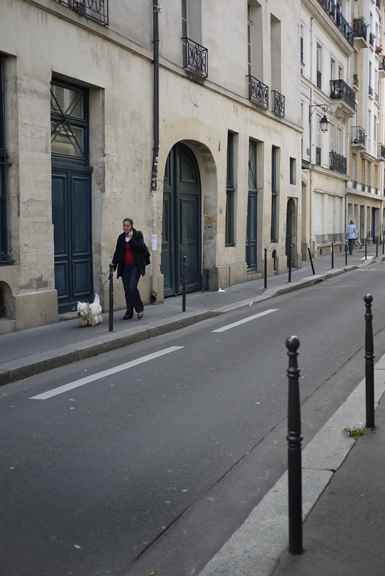 Eventually I ended up at the Seine and walked along the river. At the Pont Des Arts, I noticed that the “locks of love” were back. I spent a half hour reading the names and initials, and imagining the love story each lock represents. 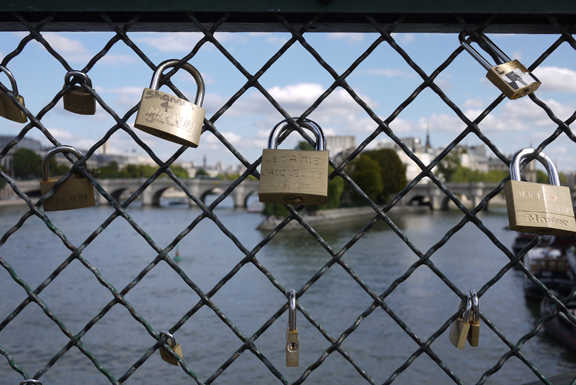 I also saw a few couples who were struggling to take self-portraits with their locks. For a half hour, I made it my mission to offer to take their photos. No one turned me down. It’s nice to think that seven or eight couples will go home with a personal souvenir of this glorious afternoon in Paris.

Further up the river, at the very tip of the Ile St. Louis, a woman and her son approached me. “Excuse moi, madame,” she said. “Tour Eiffel?” Their guidebook was in Italian, so I told them “e molto lontano di qui.” Very far away. I helped them figure out their métro route and sent them on their way. It wasn’t until after they left that I realized they thought I was a local. Cool.

I only had an only an hour left before my rendezvous with my friend Chris. (Aside: My former colleague is doing a six-month stint at the International Herald Tribune, so we’d arranged to meet for a drink after he got off work.)

So I hightailed it along the Seine, past the docks moored along the river, past the street performers in front of the Centre Pompidou, through the bustling Les Halles shopping center, and found Chris seated next to the Big Giant Head behind St. Eustache.

Nothing quite compares to meeting a friend at a café in Paris.

We sat and chatted for two hours as the humanity strolled by. The highlight for me, though, was witnessing a prolonged, expletive-laced rant by a man of African ancestry directed at a man of Asian ancestry in which the former accused the latter of being racist. I don’t know what provoked the incident, but by the end I had a pretty clear idea of who was truly racist.

After two kir royales, the jet lag was catching up to me. Chris escorted me to the métro station and pointed me toward home. I called Esteban from the hotel to let him know I’d arrived, and I was out like a light.

What a perfect first day in Paris.

Here are the highlights of what I saw along the way. Up tomorrow: A photo workshop in Montmartre.