I slept like a rock and didn’t stir until 8:30 this morning (which — as my husband Esteban would tell you — is abnormally late for me). Then, I put on some tea, finished unpacking, and started ironing my clothes.

Ironing in France is different than in the States. For one thing, the ironing boards are usually smaller. (The one in my hotel room would be more suitable for a Smurf.) After stooping over it for an hour, I knew how Quasimodo got his hunchback.

Over the next couple of hours, I drank some tea, sorted through my photos, drank more tea, wrote my blog, drank tea, and then drank some more tea.

Feeling adequately jittery to pass for a Parisian, I headed out to meet my friend Chris. Our rendezvous was at his apartment, which is a comically tiny garret on the sixth floor of a rickety 17th-century building. 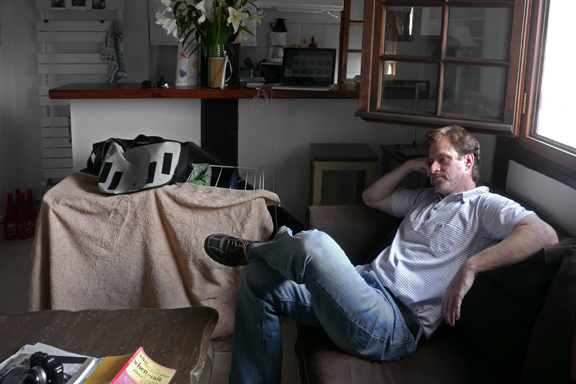 I marveled at the ingenious ways he’d found to make the most of the space. I also suddenly understood why the street life is so vibrant down below: I’d go stir-crazy if this were my home.

Chris gave me the dime tour of his ‘hood. Down the street is the boulanger who won last year’s prize for the best baguette in Paris. Two shops before that is the American-friendly wine store “where they treat you just as well whether you’re spending 9 euros or 100,” according to Chris. Around the corner is a glorious cheese shop — and a busy, vibrant market street. Clearly, Chris was living like the locals.

It had struck me the night before how intimately Chris had gotten to know his quartier in just four months. He’d told me about the beggars and their familiar haunts, even detailing their sleeping habits. He’d talked about the ebb and flow of the traffic, and described how the vibe changed depending on the hour of day. In effect, he’d discovered first-hand what Parisians have always known: This may be a huge city, but every neighborhood is really a small village.

We hopped in the métro and headed for Anvers. I’d “hired” Chris for a photo workshop today, and I wanted to shoot Montmartre.

Unfortunately, our adventure got off to a hairy start. There had been a disturbance of some sort in the station, so the police had blocked the entrance. Chris and I were in the middle of a growing crowd of agitated, impatient North Africans who just wanted out. The idea of a stampede seemed very real as I watched the crowd build behind us. Fortunately, the floodgates soon opened and the crowd surged up the stairs and onto the street.

Chris and I spent the next three hours in Montmartre. I had three humble assignments: (1) to shoot some abstract photos, (2) to shoot a non-postcard image of the Sacre Coeur basilica, and (3) to shoot images that used shadows in creative ways.

I tried to focus on the abstracts, but within minutes I was tackling all three assignments at once. The place was visually overwhelming. 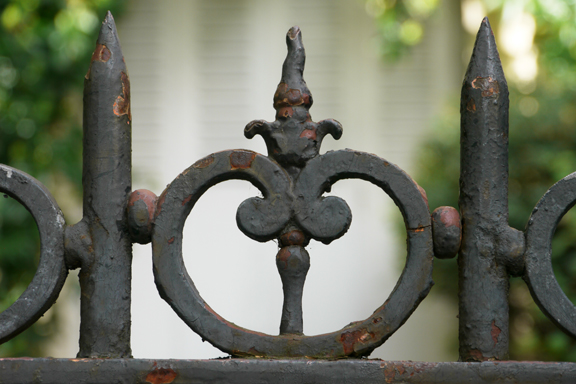 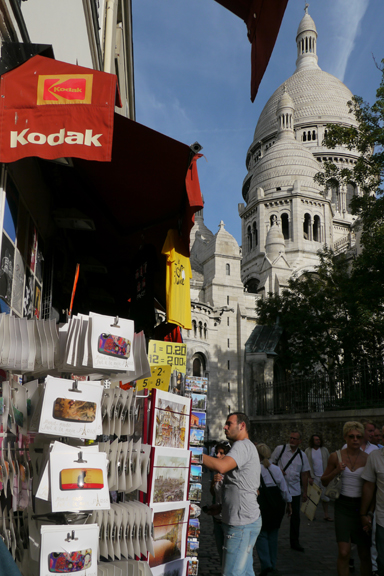 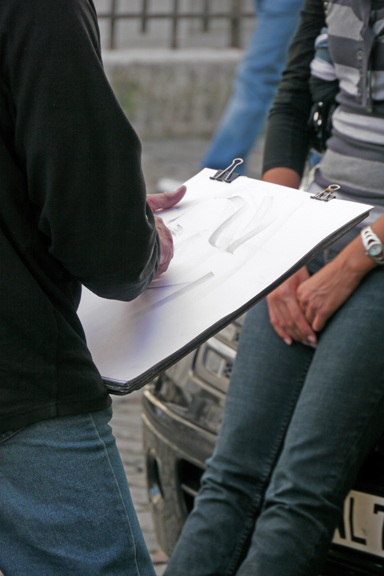 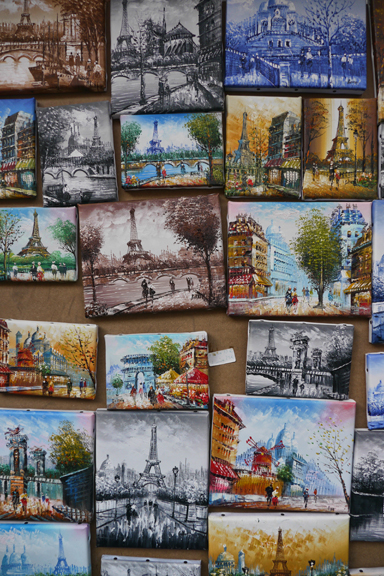 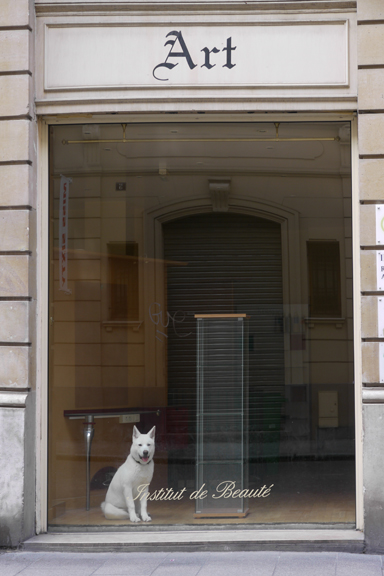 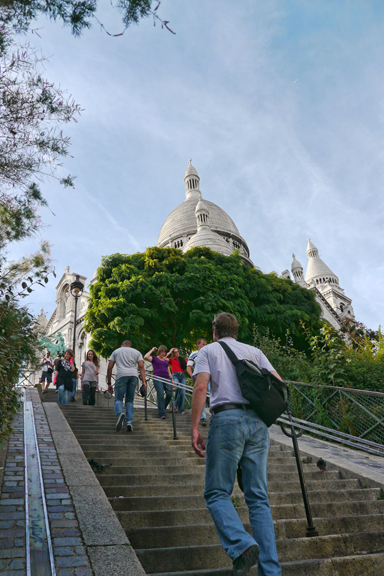 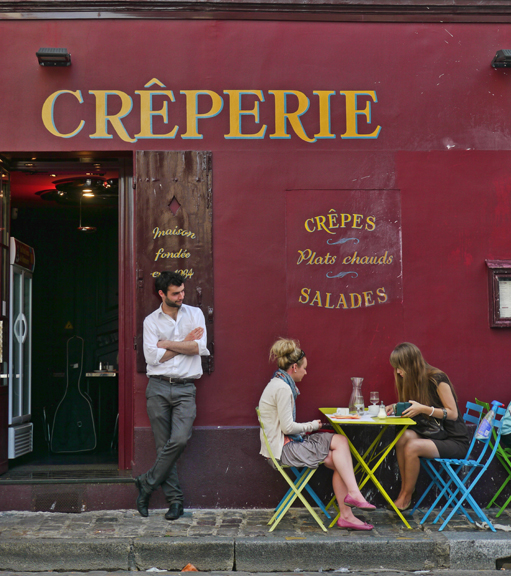 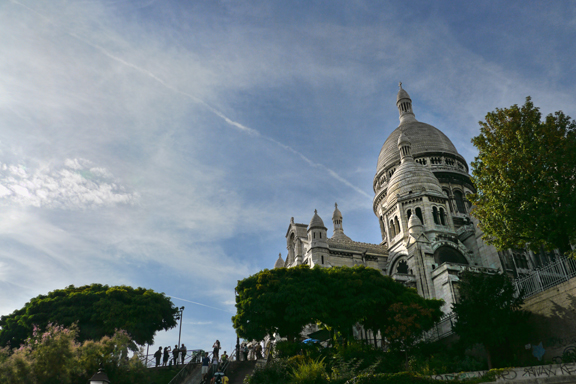 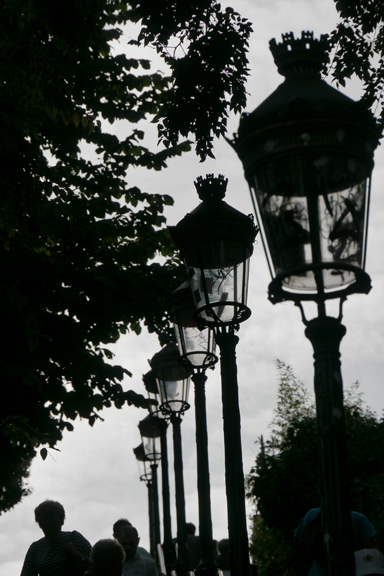 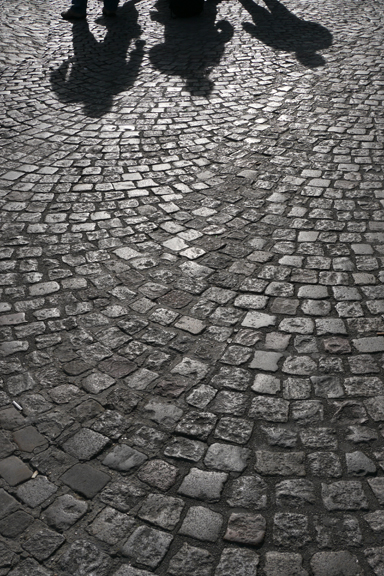 My favorite shots of the day were of a young couple embracing in the park. Even from a distance I was drawn into their quiet, private world. The teeming masses of tourists and the noisy hawkers disappeared, and all I felt was the stillness of their repose. 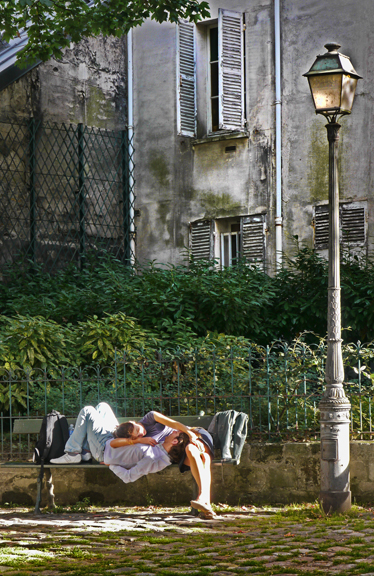 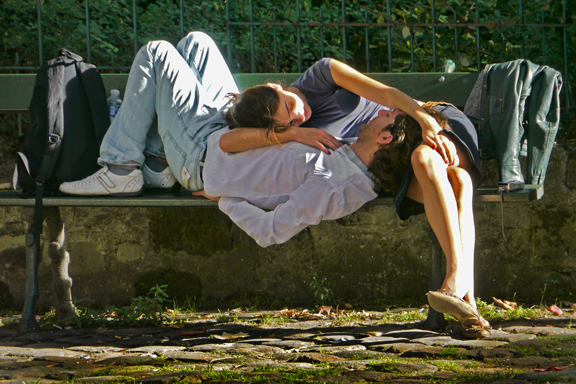 Chris and I grabbed a crèpe at a sidewalk café. He talked about the importance of being a patient photographer. Sometimes the best images come from sitting still for an hour — or four — and letting the shot come to you. He must have noticed that I’m more of a Jack London kind of a shooter: I go after my images with a club.

Just then, as if to prove Chris’ point, a guy on stilts walked by. Chris got the better shot, but I was content to capture the hapless tourist in the background. I found his blank stare and flaccid posture quite humorous and endearing. 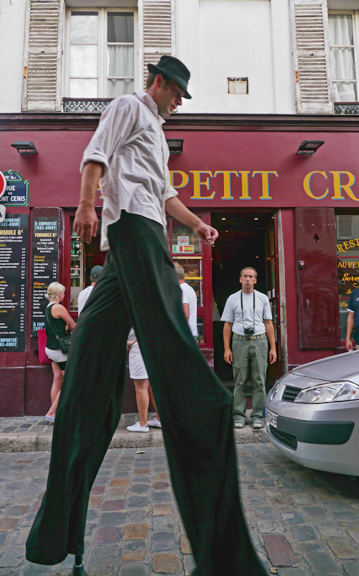 Chris and I walked back to the métro and decided to pay an evening visit to the Père Lachaise cemetery. Alas, the gate was already closed. So we popped back into the métro and got out at Place République. The sky was amazing. We stood on the edge of the busy roundabout for a half hour, watching the light change. 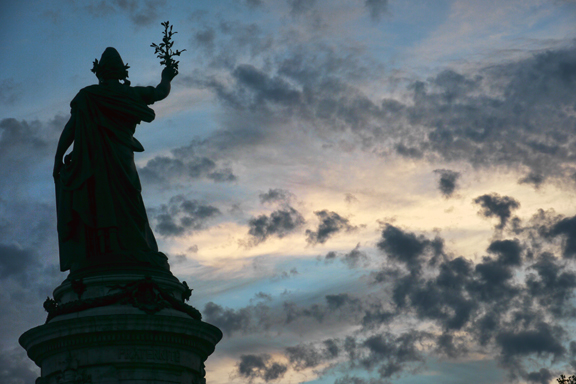 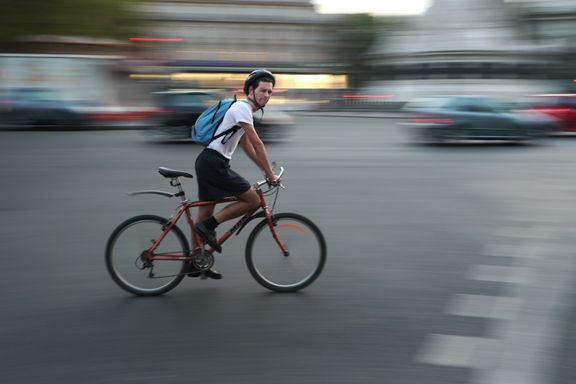 We wrapped up our afternoon together with a photo critique over dinner. Chris’ observations and suggestions were as insightful as I’d expected. He’s a brilliant photographer — and a great teacher, too.

I was sad to bid him farewell as we came to the fork in the métro tunnel. He’s off to Italy to teach a photography workshop, and now I truly don’t know a soul in this city of 11 million people. But I don’t feel one bit lonely. I’ve got my own village, too.