As I posted my blog entry this evening, the most recent “Freshly Pressed” selection caught my eye. It had no accompanying image and was titled simply 2996.

I soon learned about the 3,500 bloggers who had volunteered to write a memorial for one of the 9/11 victims. Unfortunately, some of the links had since expired—and some of the tributes had disappeared. “If you would like to help out, please select a name from the list of those without tributes,” read the instructions.

That’s how I came to learn about Edward (“Eddie”) Calderón. 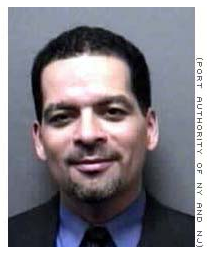 But tonight, I don’t want to focus on Eddie’s death. Instead, I want to write about how much he loved music and salsa dancing and life.

Eddie lived in Jersey City, New Jersey, and was a security guard for the Port Authority. His office was in Tower 2 of the World Trade Center, in the basement control center, where he’d worked for 22 years.

He was a devoted employee, but his passions were music and dancing, according to a brief article in The New York Times.

“When I think of him I remember that he loved salsa,” said his niece, Desiree Henley. “He was extremely outgoing, loved to dance.” “He was the life of any gathering,” said his sister-in-law, Sandra Calderon. And for years, he organized a regular Wednesday night salsa party in different locations at the World Trade Center for anybody who wanted to come, said his brother, Anthony. “… he was an entertainer,” Anthony said. “That was his calling.”

It was through that “calling” that Eddie met many of his friends. As a promoter and DJ for the Skydive club on the 44th floor of WTC 1, Eddie brought people together—and made them happy.

His friends remember him for his beautiful smile, his contagious laugh and his easy manner. A few remember him from the housing project in the Bronx where he grew up; others spent time with him in the Marines.

But the common thread that runs through their memories is how much he gave of himself to others. He was a “… gentle, kind, friendly [man who] liked to help people, no matter who they were.”

Eddie taught his niece Jessica how to play the piano. He attended one friend’s community theater production. He helped another friend’s brother find a job. He gave his nephews rides, and he was a source of solace to his mother when she was ill.

Eddie lived his life helping others … and that’s also how he lost his life.

On September 11, 2001, Eddie was last seen running toward the north tower after helping guide dozens of workers to safety. He was hoping to reach a few more just before the building collapsed, according to one witness.

And ten years later, his friends and loved ones are still thanking Eddie for how much he gave of himself.

Eddie, you will be missed by many, but your kindness will live on. — Christina, friend

Read more about Eddie at legacy.com. And please consider writing your own tribute through Project 2996.