Is someone stealing your photos?

When I accidentally documented a major news event in 2007, my photojournalist friends advised me to hire a rights-management agency — and fast.

I was grateful for their advice: Within 24 hours, my images were all over the Internet.

Most of the online news sites had acquired the photos through the Associated Press. But a handful of others were using my photos without permission — and in a disgusting, sensationalist way. I’m so grateful that Polaris Images was there to help.

Only four years later, I’m happy to report that photographers and visual artists have a new ally.

TinEye is a reverse-search algorithm that compares your image to millions of others on the Web. According to one promotional video, “… TinEye does for images what Google does for text.”

In the same way that biometric software might analyze a face, TinEye analyzes the components of your image. This lets it find matches based on the image itself, rather than metadata like keywords or file names.

I was dubious at first. Still, I was curious enough to upload one of my favorite photos from the Paris catacombs.

“Holy moly!” I thought as I perused the results. “A bunch of people have stolen my photo!” 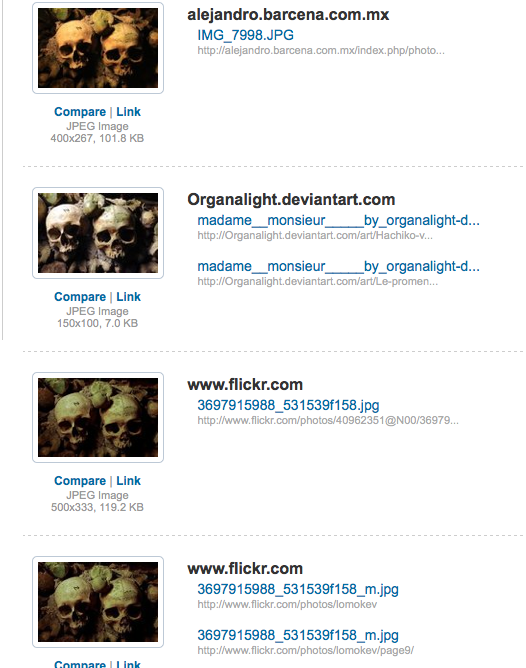 I was wrong, of course. By using the “compare” feature, I discovered that a bunch of people had actually taken the same photo. The differences between my image and one of the matches were subtle — but evident.

TinEye offers lots of other options such as searching by closest match, most altered and file size.

The real genius behind TinEye, however, is that it shows you all of the matches, even if they’ve been altered, cropped or Photoshopped.

I loved the example from their demo video. Here’s the original …

… and here’s one of TinEye’s results:

Hideous! Yet kind of cool that TinEye recognized it and flagged it.

Of course, that’s not to imply that you’ll always get a match for your image. But that will likely change as TinEye continues to crawl the Web and build its database.

Want to learn more, or give TinEye a try? Check out www.tineye.com.

HBlog is not affiliated with TinEye or Idée, Inc. and was not compensated for writing this post.