I am sitting in the very heart of the city where Elvis Presley recorded Heartbreak Hotel in 1956 … where Bob Dylan cut Blonde on Blonde in 1966 … and where Kansas laid down Dust in the Wind in 1978.

Those are just three of the reasons Nashville, Tennessee is known as “music city.”

When I arrived shortly after lunchtime today, though, I was underwhelmed. The streets downtown seemed empty and most of the shops seemed to cater to tourists.

I was hungry, but was dismayed to find only a Joe’s Crab Shack and a Hard Rock Cafe nearby.

So I decided to walk across the Shelby Street pedestrian bridge to get the lay of the land. I’ve got to admit that the view of Riverfront Park was pretty spectacular.

And by the time I’d made it across the bridge and back, downtown had been transformed. There were buskers on the street corners and small groups of tourists pouring into the bars. I loved having to walk only a few steps to hear a different band. 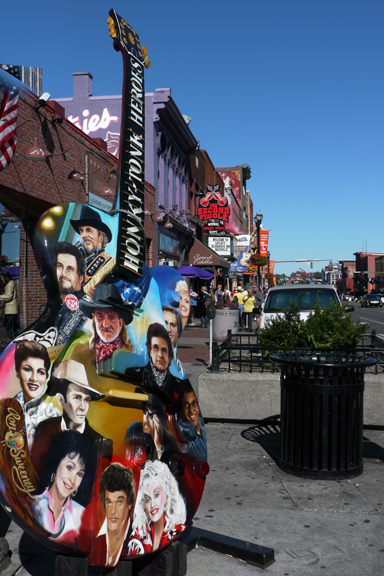 … and the antique Cadillac that someone had parked casually outside one of the bars. 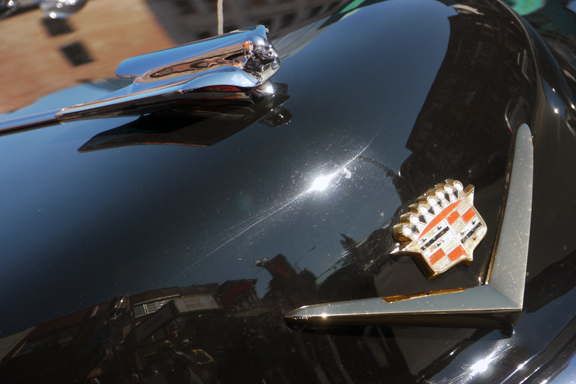 I also enjoyed browsing the CDs at Ernest Tubb. The selection was overwhelming—in the best possible sense.

Then I did a bit more window-shopping …

… and lurked outside a couple more bars. 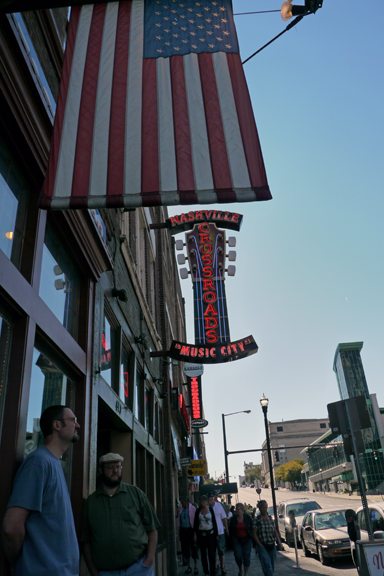 That’s when I spotted the sign for The Stage.

It’s a bit of an inside joke, but I know that my friend dancingbeastie will appreciate the sign’s lettering.

The highlight of my day, though, was stumbling into one of the very stores I’d bemoaned earlier. The owner, Sheilah, was lovely and gracious and welcoming.

Alas … I couldn’t afford the covered-in-autographs guitar and I didn’t need a weathered driftwood mirror.

But I couldn’t resist buying myself a straw cowboy hat. (Yes, I’m a dork.)