To my friends, family, and faithful readers: I apologize that my posts have been a bit … um … “sputtery.” I’ve been spending my evenings with Esteban, rather than with my computer. Also, our Internet connection is as pouty and unpredictable as a French ‘demoiselle. But rest assured that all is well—and that I’ll continue to post my adventures as I’m able.

And now, back to our regularly scheduled programming.

No matter how well I may try to prepare for my travels, there are some things one can learn only from experience. Like how to use the local appliances, for instance.

Today was Esteban’s anniversaire. We had big plans for a big evening out, so we decided to take it easy during the day. This meant doing a bit of grocery shopping, some laundry, and washing the dishes from a couple of days’ meals.

Let me say this first: Esteban and I are incredibly lucky to be in an apartment that has a washer/dryer and a dishwasher. These “mod cons” are still fairly rare in even the nicer flats, so we’re grateful to enjoy such convenience.

But convenience often comes at a price.

Take the washing machine, for instance. I won’t whine that we’re in France, and yet the instructions and buttons are in Italian. I figured out the difference between Lavaggio Classe A, Extra Asciutto and Partenza Differita without too much trouble. What I *couldn’t* figure out was precisely in which order you’re supposed to push the buttons. And there are a lot of buttons. 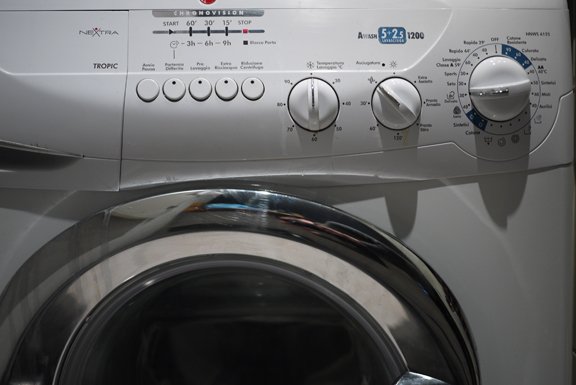 My first attempt at unlocking The DaVinci Washer Code accidentally launched a satellite, I think. My second garnered no response whatsoever. But with my third attempt the formerly indifferent Italian machine lurched to life with the violence of a gladiator.

Then, just as abruptly, it stopped. “Blocco Porta,” blinked the ominous red light. Was something wrong with the door? I started poking buttons again in a futile attempt to open the machine and diagnose the problem. Suddenly, the lurching resumed.

This continued for over three hours: Stop. Lurch, churn, swish. Lurch churn. Stop. Swish. SPIN!! Stop. Lurch. Churn, swish, stop. I was grateful when the noise finally stopped for good. The gladiator was dead. But my clothes were clean!

Now it was Esteban’s turn. He’s a big guy, so he managed to fill the tiny washer with just one pair of pants, two shirts, some socks and a sweater. In hindsight, I wish I’d translated the general meaning of the various buttons and knobs: His pants, shirts and socks emerged just fine. But neither of us has any idea what the hell happened to his sweater.

The dishwasher instructions — mercifully — were at least in French, and there were far fewer buttons. But that didn’t exonerate me from having to make some tough choices. Did my dishes merit just the “Normal” treatment? Or did they call for “Intensif”? I opted for normal, poked the “Départ” button, and wandered off to get ready for dinner.

Esteban chose the location of his birthday dinner out of the DK guide he’d found in our apartment. La Baracane — at 38, rue des Tournelles — was literally 200 feet from our flat’s front door, but the food was out of this world. We dined French-style by lingering over our meal for almost two hours.

Esteban had also chosen his birthday gift out of a newspaper he’d found in our apartment: On Friday we’d walked to Bercy to buy two tickets to see Jamiroquai.

The show was supposed to start at 10 p.m., which is precisely when we left the restaurant. We didn’t much care about hearing the warm-up act, so we thought we’d time it about right if we arrived at the stadium at 11. We couldn’t have been more wrong.

As we approached the Stade de Bercy on foot, a steady stream of people was pouring out of the stadium. “They’re probably all coming out for a smoking break,” Esteban said.

I handed our tickets to the docent at the door but he held up his hand in the universal gesture for Stop. “Non, madame. C’est fini,” he said. I asked for an explanation, but he just shrugged. Only an hour after it had started, the show was over. And we’d missed it!

But neither of us was terribly disappointed. We held hands as we walked the entire distance from the stadium to our flat. We enjoyed the increasing solitude as the night drew long. We talked about our experiences in Paris so far, and about our hopes for the year ahead.

And when we got home, hours later, the dishwasher was still running. Only in Paris would a six-hour cycle be “normal.”