A loss for writers and nomads everywhere

Some people call me the Don Quixote of the Latin Quarter because my head is so far up in the clouds that I can imagine all of us are angels in paradise.

George Whitman wrote those words on the chalkboard outside his bookstore on January 1, 2004.

George Whitman, who died in Paris yesterday at the age of 98, was a dreamer indeed — and an optimist, a philosopher, a lover of words and books.

But most will remember him best as the owner of Shakespeare and Company. That’s how he became a patron saint of writers and a Parisian literary legend.

I wish I’d met George Whitman. Although I spent many hours in his shop over the years, I never mustered the courage to ask, “Is George around, by chance?” It seemed presumptuous, and too much of an intrusion.

Plus, what would George Whitman — who had known Henry Miller, Anaïs Nin, Samuel Beckett, James Baldwin, Allen Ginsberg and even Ernest Hemingway — want with a fifth-string writer like me?

After reading George’s biography on the Shakespeare and Company website, I am filled with regret: We would have had plenty to discuss. (I, too, once got lost in a South American jungle.) And we could have chatted in Spanish.

After his graduation [from Boston University] in 1935 he decided to travel again. With $40 in his pocket he caught a ride to Mexico City and began a voyage that was to trace almost 5000 kilometers through Mexico and Central America, including Honduras, Guatemala, Costa Rica. During this time he became fluent in Spanish.

This trip was a formative experience in George’s life. Much of his traveling was done alone and on foot. He had many adventures and close calls. In an isolated part of the Yucatan he fell sick with dysentery and was forced to walk alone for three days through the swampy jungle with no food or water. Eventually he was found and nursed back to health by a tribe of Mayans. George was deeply impressed by the fact that despite hardship and extreme poverty, the people he met were invariably friendly and generous. This philosophy of “give what you can, take what you need” would become one of his founding principles.

And live by those founding principles he did: Above his bookstore were several rooms he let out freely to visiting writers (and at least one musician I know). Some stayed for a few days; others for weeks or even months. According to the obituary article in today’s Irish Times, by his own estimate George lodged some 40,000 people.

I was touched to read some of those people’s tributes to George on Facebook this morning.

I’m sure George had no idea how many lives he’d help shape, when he opened the first incarnation of his bookstore in 1951. (He certainly enriched mine.) 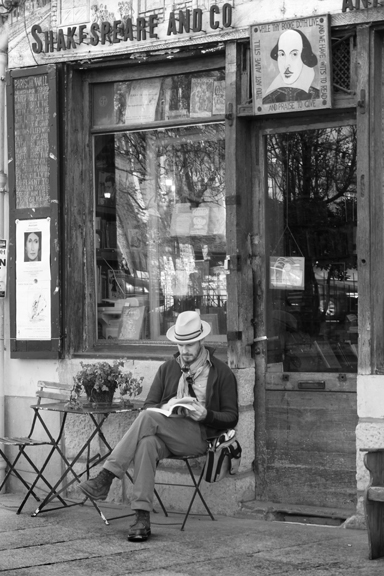 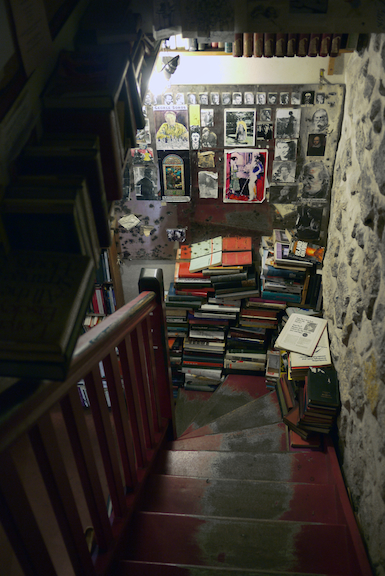 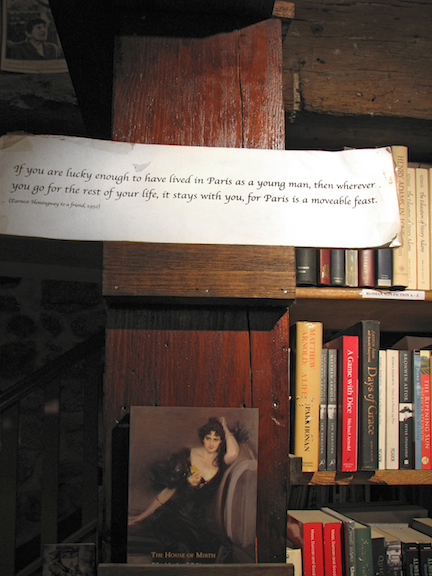 But even the richest and most wonderful of stories must end. George’s message on the chalkboard concluded like this:

… In the year 1600 our whole building was a monastery called La Maison du Mustier. In medieval times each monastery had a frère lampier whose duty was to light the lamps at nightfall. I have been doing this for fifty years; now it is my daughter’s turn. —GW

My heartfelt condolences to George’s daughter, Sylvia Beach Whitman … and my heartfelt gratitude for carrying on her father’s light.

To read more:
A personal recollection from XpatScot
The Washington Post
The Telegraph
The Los Angeles Times
Janice Harper for The Huffington Post