I’ve been a bit overwhelmed in the aftermath of my personal Noah’s Flood, so I haven’t blogged much lately. In spite of this fact, I’ve still managed to pick up a couple of new subscribers — including former U.N. Secretary-General Kofi Annan!

I’m tremendously honored that he’s read my humble mumblings. But I was astounded that he actually took the time to comment:

I found your blog through a search for “[omitted to protect privacy]” and also read some of your other postings. One thing I noted was the diversity of your thoughts. I believe you would have a more loyal readership if you were to treat a single topic. I would encourage you to find the one subject for which you truly have a passion and give it the singular attention it merits.

At first I didn’t know what to make of the comment. I truly do have a passion for Paris, photography and writing. But upon further reflection, I realized that Mr. Annan had a point: In writing about so many topics, I’ve all but forgotten the single, driving passion of my life.

I’ve been obsessed with aardvarks since about the second grade, when I first learned how to spell aardvark. I was smitten with the sound of those first two, twin letters — aaaah — the sound I might make as I sip a cup of cocoa. Or plummet off a cliff to my death.

And then there’s “vark.” What other animal can claim “vark” as its second syllable? Go ahead, rack your brain. If you’re like me, you’ll only get the image of a dachshund barking with a thick German accent.

Over the years my appreciation for the aardvark has only deepened, as I’ve come to realize how much I have in common with this strange nocturnal animal. To paraphrase enchantedlearning.com, the aardvark and I:
• are both hairy, burrowing mammals,
• measure about 5 feet (including the tail),
• have a long snout and a sleek, brown coat,
• possess poor eyesight but have a keen sense of smell,
• have teeth made of cement (mine are mostly fillings),
• grow bristles around our small mouths, and
• look extremely goofy when we walk. 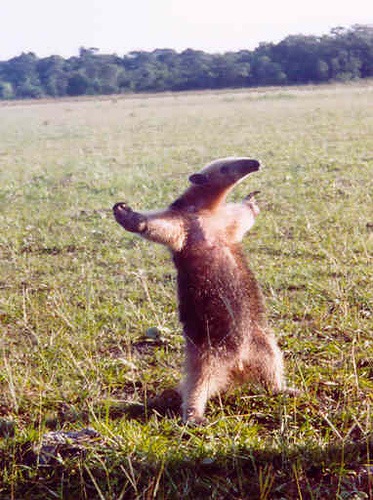 So I hope you’ll join me as I say goodbye to HBlog and devote my blogging energy to AardvarkBlog.

I also hope you’ll — eventually — forgive me for pulling the wool over your eyes. To my knowledge, Kofi Annan has never read my blog. But I really do love aardvarks (and their funny name). Happy April Fools’ Day!