One of the least-discussed truths about travel is that your lodging sets the tone for everything — which is why I sometimes pay a bit more to stay in the heart of a city. But, as I learned last December in Freiburg, straying off the beaten path can sometimes yield its own delightfully unexpected rewards.

I’d been to Freiburg before:

Once, I’d stayed in a tiny hotel near the Münster (Freiburg’s Catholic cathedral) and a couple of other times I’d rented a renovated coach house just outside the Altstadt (the “old city”). 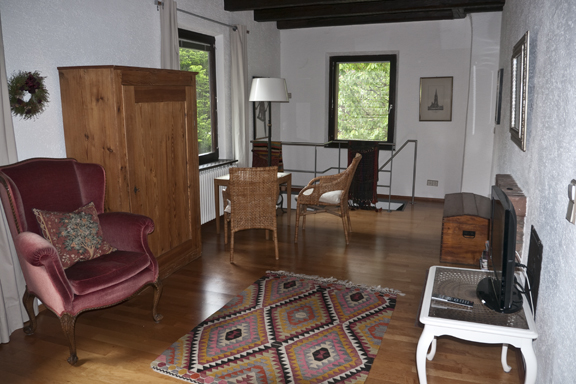 Both places were lovely, and I loved being within a few minutes’ walk of the old town. But alas, both  were a bit too small for me and my six-foot-something husband — so instead I booked us a modern apartment in the foothills of the Black Forest.

I was giddy with anticipation on the way to Freiburg, when we switched trains in Karlsruhe. “Look, Esteban! A billboard for the Christmas markets!”

Esteban was less enthusiastic: We were tired and cold, and it was sputtering rain. “Let’s take it easy and take a taxi to the apartment,” I offered.

But my enthusiasm soon waned, too, as the taxi climbed farther and farther up the hill. I imagined the two-hour hike it would take to get back down into town. “Oh, well …” I resigned myself. “We’re here only in passing.” Some 1o minutes later we finally reached the apartment and settled in.

Then, the most amazing thing happened: The sun set! From our perch on the hill we could see the outline of the Münster’s spire, and below it the city’s lights were twinkling to life. Esteban and I gave each other a high-five.

But once again, our glee was fleeting. We had nothing to eat. We’d have to brave that two-hour hike, after all — in the dark. We put our boots back on and started trudging down the road.

“I wonder where that path goes?” Esteban asked a minute later. I was apprehensive as he started down the hillside, but I followed him. “As long as we can see the Münster, we can’t get too lost,” I reasoned. We used our phones to illuminate the rocky path, and to navigate the narrow switchbacks.

The further down we got, the wider the path got. Soon the path was paved, then lit, and then — in about 15 or 20 minutes — we were in the Altstadt.

The famous Weihnachtsmärkte were in full swing … 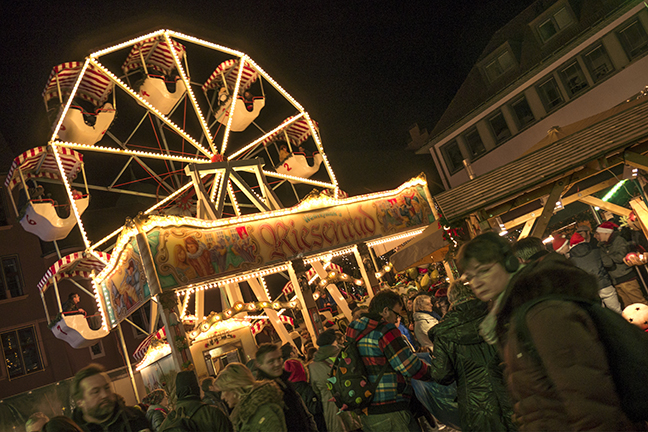 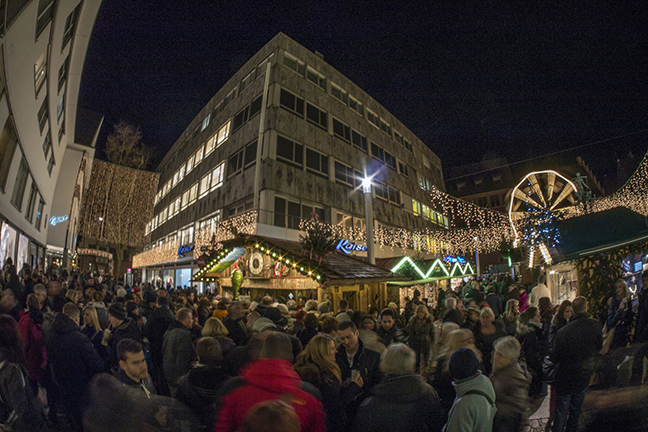 … but having just seen the markets in Heidelberg and Cologne, we opted for a sit-down dinner in my favorite pub instead. And — somehow! — we found our way back to the apartment.

I got up early the next morning and discovered the real benefit of staying up on the hillside. (More on that soon, as it merits its own post.)

Later that morning, Esteban and I explored a different route into town and spent the rest of the day roaming the cobbled streets of the Altstadt. I was as enamored as ever with the charming little bächle (canals) that crisscross the old city. 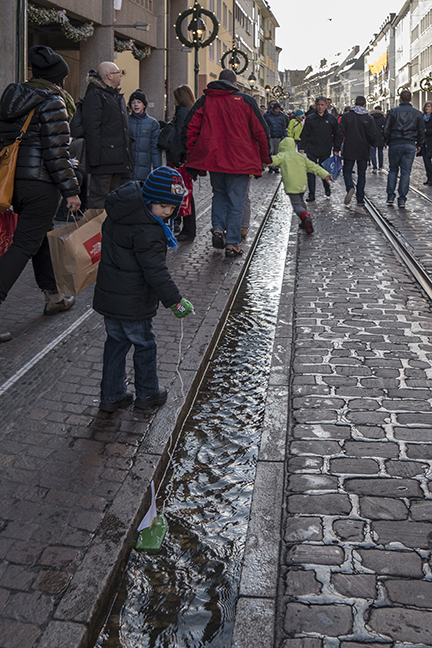 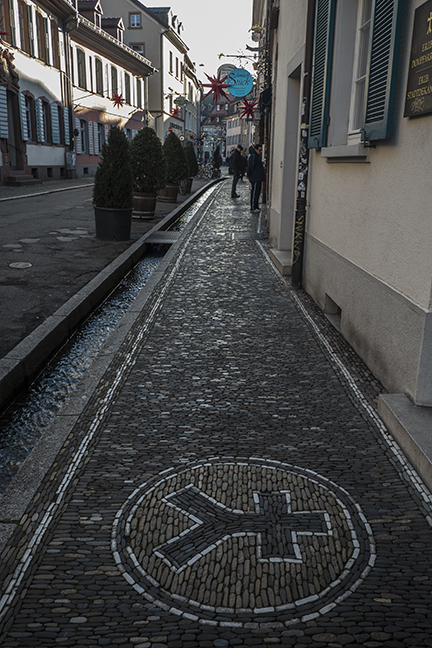 We also revisited the Weihnachtsmarkt. Yup, it was still in full swing — and still just as crowded. 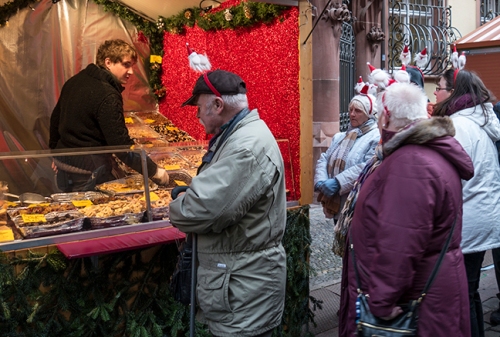 I played around with capturing reflections of the city for a while.

But even that soon wore thin, so we abandoned the crowds for the less-traveled side streets. 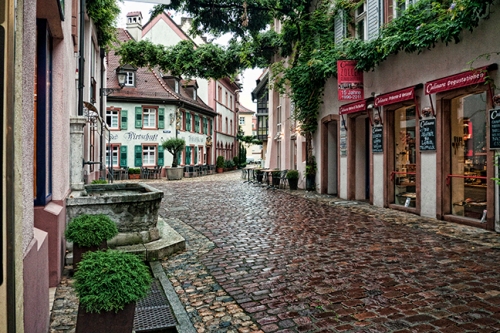 For me, it’s in these tiny pedestrian-only streets that Freiburg’s beauty really shines. 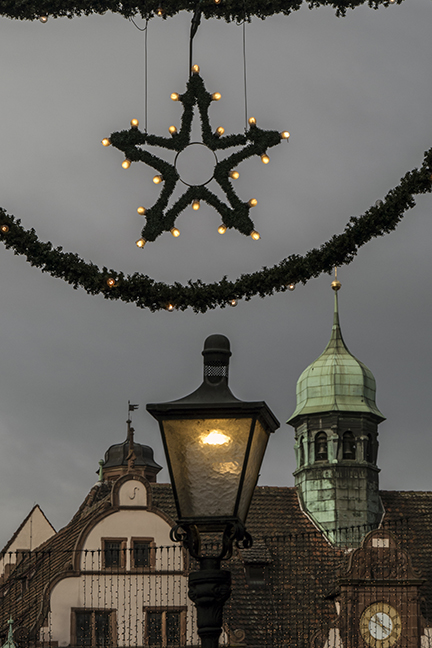 As evening fell we took one last stroll down the Kaiser-Joseph-Straße.

Most of the shops were closed, and all that remained of the daily farmer’s market was a few seeds and petals among the cobblestones.

We briefly considered a concert inside the Münster.

But because the tickets were €20 each — and because neither of us particularly fancies Wagner — we decided to take the long way home instead. And for that, we were rewarded with a most magnificent sunset.

In hindsight, I’m truly grateful that we stayed a bit further afield in Freiburg: We got a lot of exercise — and we explored parts of the city we never would have seen otherwise.

More to come from my favorite German city.