On top of the world in Freiburg

Yesterday I wrote about the impact one’s choice of lodging can have on a trip — and about the unexpected joys of occasionally staying further afield. Such was the case in the beautiful little city of Freiburg im Breisgau, which lies in the foothills of Germany’s Schwartzwald (Black Forest).

You need not be a cartographer to see that the hills around the city are covered in footpaths.

But although I’d climbed far enough on a previous trip to see the ruins of the castle, I’d had no reason (or indeed, motivation) to explore further. All of that changed last December, when I found myself living on the hillside — and therefore, exploring these paths out of sheer necessity. 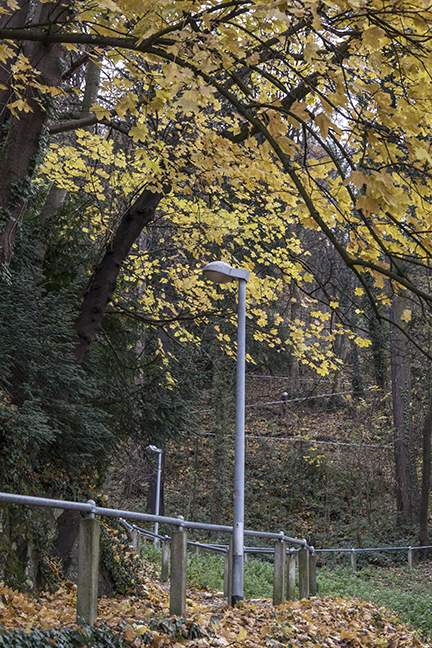 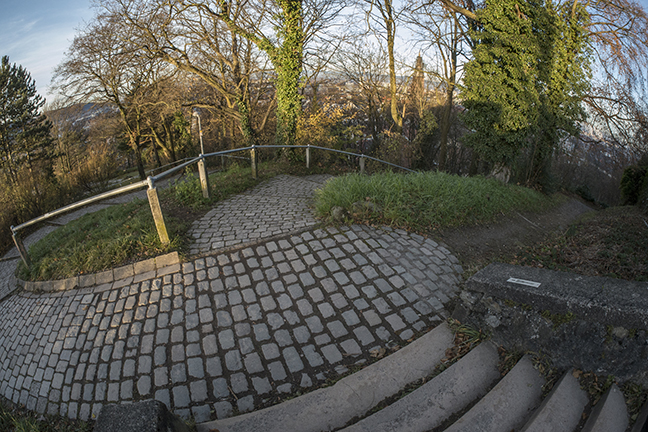 Although the paths varied in their condition and vertigo-inducing potential, the stunning views of the city egged me on. 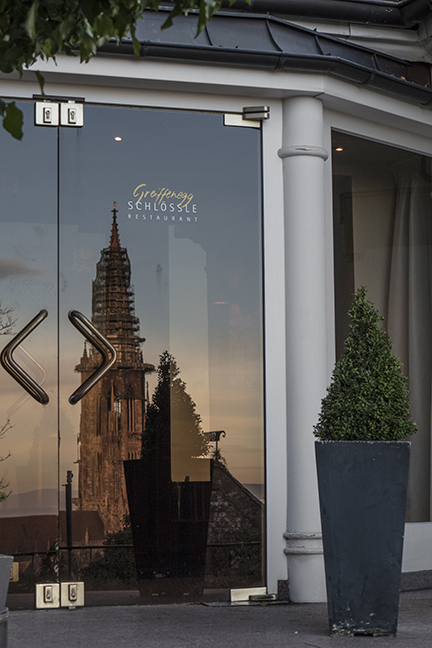 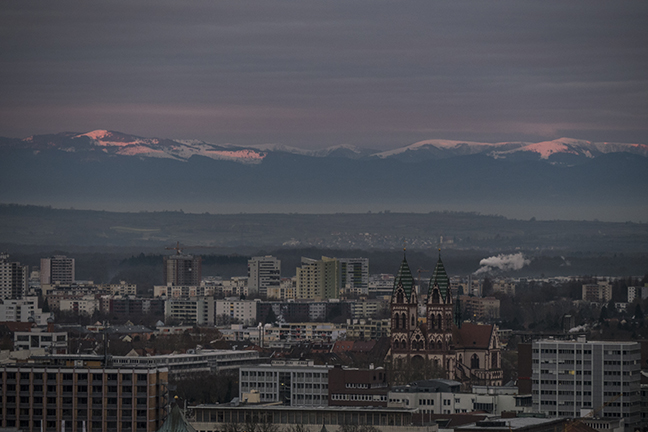 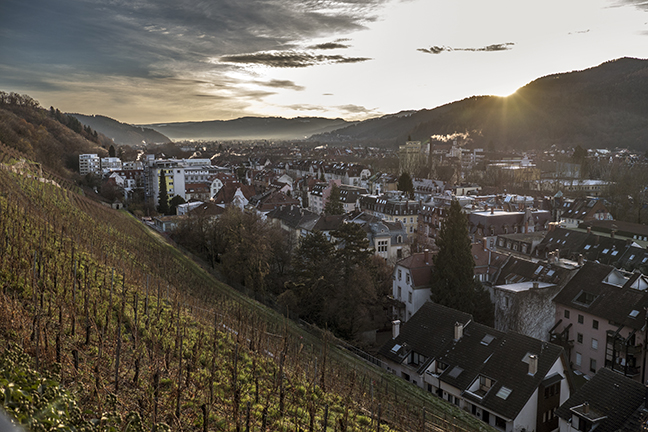 Then, on one of the switchbacks, I spotted a strange icon. I’d once seen footage in a video of an enormous tower overlooking Freiburg. Had I inadvertently stumbled onto the right path? 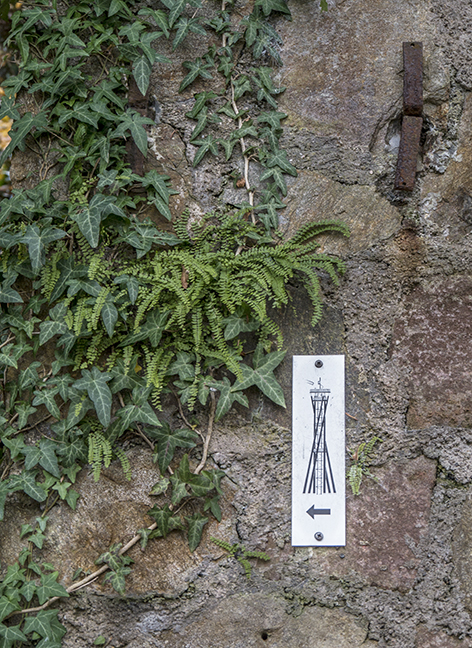 As it turned out, there wasn’t really a single “right” path.

And so it was that I embarked on an unplanned 1.5-mile hike in search of the Schloßbergturm.

It doesn’t look very impressive from the ground.

But when you’re standing at its base, it feels very imposing indeed. 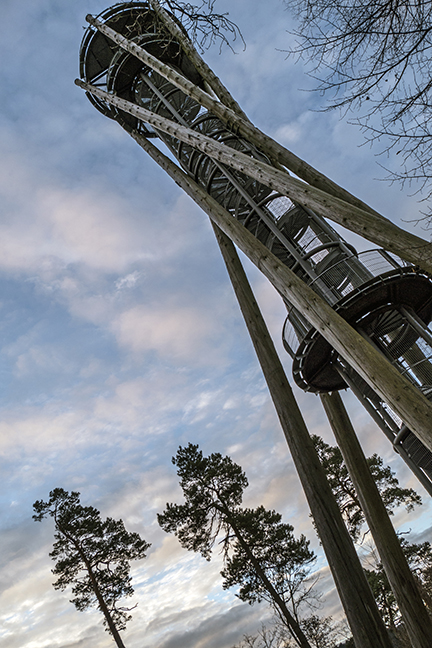 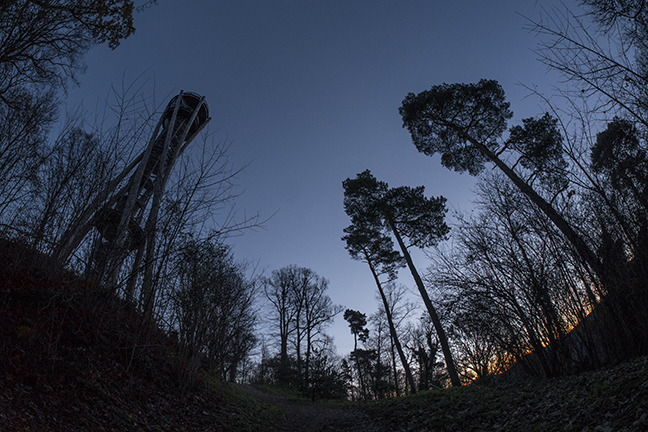 I’m not a big fan of heights, so it took a lot of encouraging self-talk to will myself to the top. (Small sample: “No one knows I’m up here. What if I fall to my death?! Well, I suppose if I’m dead it won’t matter. Don’t look down. Just grab the handrail and keep climbing. How far up do you have to be to reach terminal velocity, anyway? Geez, these stairs feel shaky. Is this thing swaying in the wind? What if the wooden posts snap??!”) 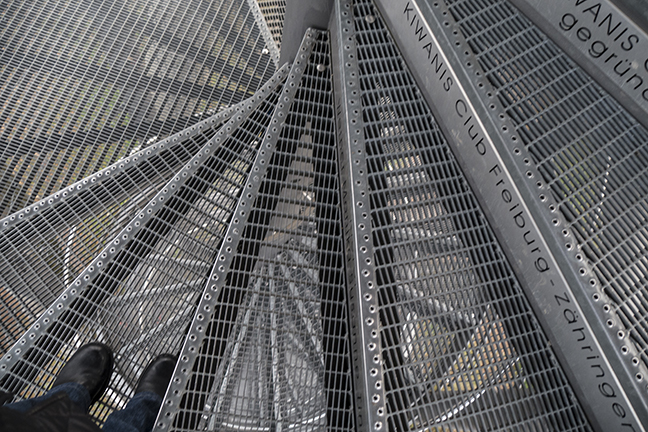 In spite of my shaky start, I did eventually make it to the top. The panoramic views were totally worth the terror — and the climb.

I loved watching the city below wake up, as the first few tourists and merchants streamed into the Münsterplatz. 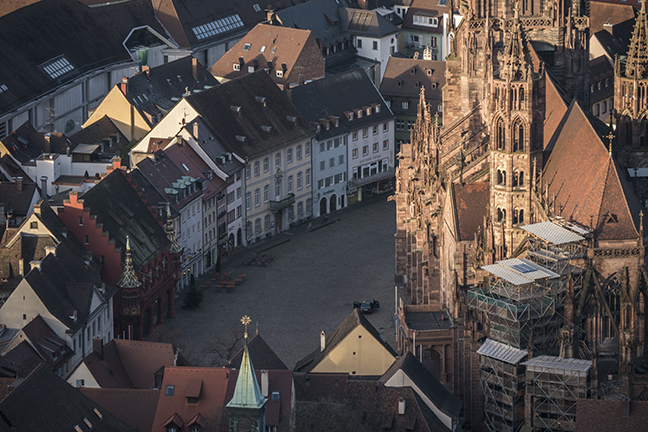 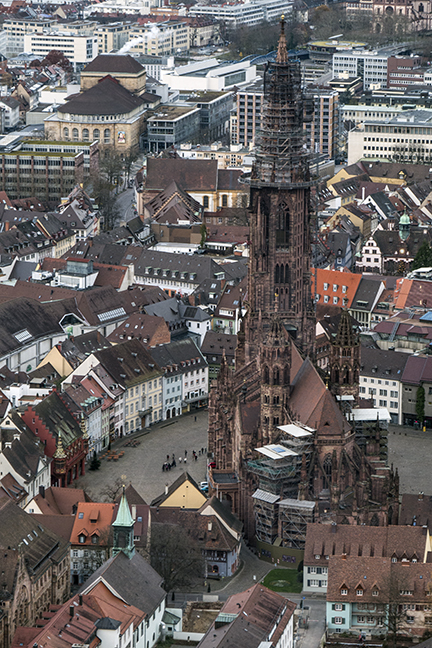 Surrounded by the sounds of birdsong and church bells, I felt as if I’d been transported back in time.

So thrilled was I by my first visit, that I braved the climb again on my second morning in Freiburg. “This time I’ll go all the way to the top,” I told myself. Alas, another photographer had already beat me to the rickety crow’s nest.

And it’s also one of my last memories of Freiburg: feeling on top of the world.