Remember the story about the farmer who had a goose that laid golden eggs? Day after day, it gave him a golden egg, but — although he was slowly becoming rich — the farmer became impatient. One day, convinced that the goose’s belly was full of gold, he slaughtered the goose and cut it open.

It’s easy to dismiss this story as a simplistic, gruesome parable about avarice and impatience. But this parable is playing out before our very eyes, in a misguided business strategy that’s almost destined to become a case study.

I’ll spare you the history lesson in which Facebook slowly grows over 10 years to amass more than ONE BILLION users. Let that sink in for a second: One-sixth of the planet’s population has a Facebook account.

Imagine what a company could know and do, if it watched how ONE BILLION people behaved … what sites they visited most often … where they shopped … who their friends are — in short, what moves and motivates one-sixth of the planet.

On one level I’m absolutely OK with Facebook throwing away the opportunity to quietly watch its users’ behavior: I’ve read George Orwell, and 1984 terrified me.

On another level, though, I feel deceived. I signed up for a service that would help “connect with [my] friends.” That sure came in handy as I made friends in France and Germany and Sweden and Morocco.

But Facebook’s new motto is “connect with friends and the world around you.” That doesn’t seem so horrible, does it? The wrinkle is that, in Facebook’s Brave New World, I’m increasingly being connected with fewer friends — and more advertisers.

I’ll admit I’ve been a bit disgruntled professionally as I’ve spent hours developing useful and engaging content (to my mind, anyway) that no one will see … unless my clients pay to promote it.

But on a personal level, I feel downright let down. I no longer have the option to sort my friends’ posts by the most recent (instead of the ones Facebook deems most relevant). As a result I’m feeling more disconnected from the people I care about — and the world around me.

I’m also trying to make sense of the world Facebook is pushing. Does Facebook think I have herpes? Or are they recommending that I acquire it? 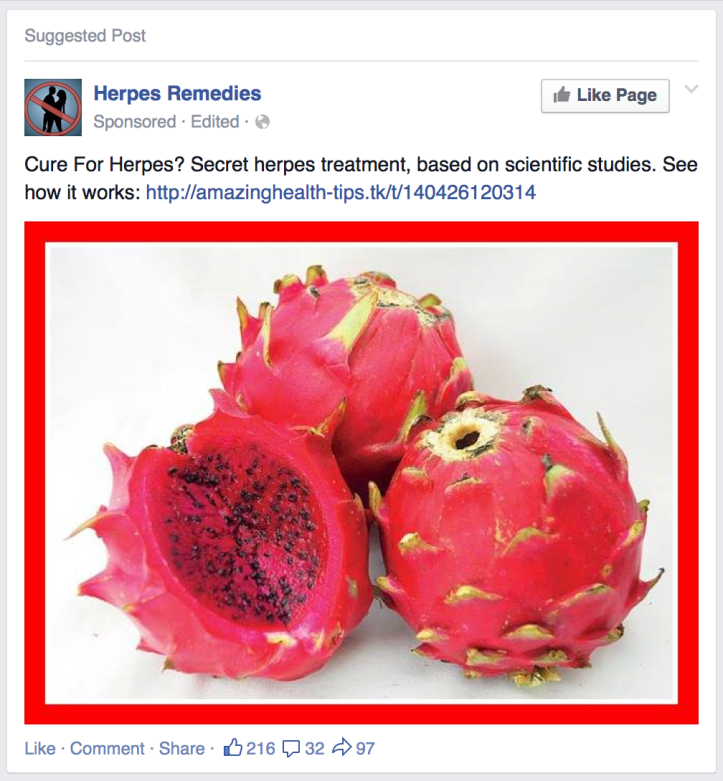 Yup, this showed up in my news feed. Meanwhile, a friend who lost her dad to cancer did not. HELLOOO? Thank God my friend had my email address, so I still got the memorial service information.

The irony is that if Facebook stopped trying to manipulate and monetize every aspect of their platform, they’d gain far more useful insights into their customers’ real behaviors and preferences. And *that* would be priceless.

I have yet to disconnect from Facebook completely, but I’m working on it. On the plus side, Facebook has reminded me that there’s no substitute for real-life face time.