I usually struggle when my parents ask what I want for Christmas. I truly don’t need anything — and increasingly I don’t want anything, either.

But last year was different. “I’d love a Fitbit,” I wrote my mom, “just the basic one, please, in a size small.”

This represented a big reversal for someone who had derided the rubbery bracelets as a toy for the self-obsessed. But after three years of steadily gaining weight, I was desperate enough to try my own tiny personal trainer.

I was a bit confused on Christmas morning, though, when I opened the carefully wrapped package. “That’s it?” I asked, holding up a little oval pellet. The instructions were minimalist: Download the app.

I obeyed, and learned that the blinking lights signaled different modes — and that one of the modes would monitor my sleep. “Look!” I told Esteban the next morning, “I woke up three times, and was restless for 28 minutes.” My enthusiasm backfired, though, because I was soon waking up to check how well I was sleeping.

Then, my obsession spread to counting steps. I started taking the stairs at work, and at home I sought the most inefficient methods of perambulation possible (go to the basement, pull a garment out of the dryer, walk two flights to the upstairs bedroom, put the garment away, return to the basement for another garment).

Most days I would strive to have 10,000 steps by lunchtime. It’s not as difficult as it sounds: 30 minutes on the rower equals 3,000 steps, and even the most minor errand adds up quickly when you take the stairs down from the ninth floor.

But in spite of my increased activity — and my super-neatly-folded laundry — my weight didn’t budge. I felt disillusioned. I was walking five miles every day! How was that not enough? I soon envisioned myself as a real-life Forrest Gump, trudging clear across the U.S. in an attempt to feed my Fitbit.

But last month, during my annual check-up, I realized I’d maybe missed the point. My doctor noted that although I hadn’t lost any weight I’d definitely become more active. I felt happier and more energetic, and my blood tests showed I was healthier.

It wasn’t until a couple of weeks ago, though, that I got the real payoff.

Fitbit awards “badges” based on your activity, you see. I don’t usually note these awards because I’m not motivated by two-dimensional graphics. But on this particular Wednesday the passing milestones did catch my attention. “Congratulations on earning your first Trail Shoe badge,” said the first email. 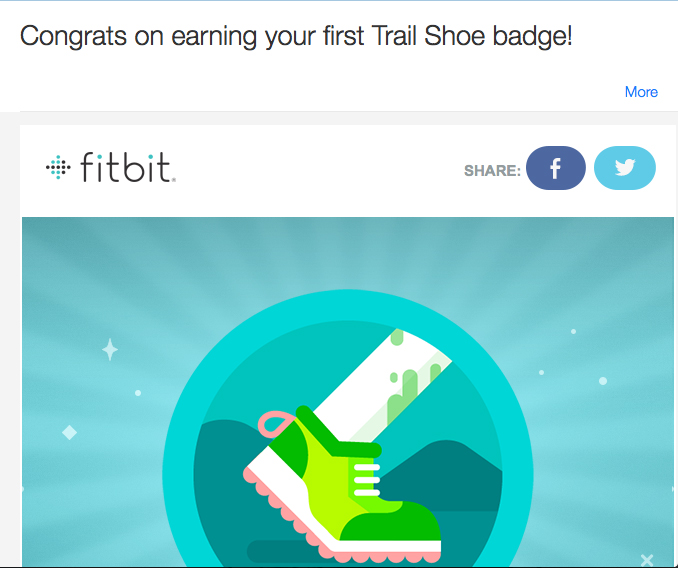 Then it was the Cleats badge. And the Snow Shoe badge. Pretty soon I’d also blown through the Cowboy Boot and the Platform Shoe.

Honestly, by this point I was a little tired of the chirpy congratulatory emails. And anyway, what if I’d been in distress? I wouldn’t have blamed Fitbit if they’d sent this email instead:

Dear H,
You’re really racking up those steps! Are you attempting a third load of laundry? Are you lost in a corn maze? Is someone forcing you to walk across Texas against your will? Call 1-800-NO-WALK if you need help.

By the end of this particular Wednesday I had walked 25.9 miles (41 km) — for the grand prize of the Blue Suede Shoes. I’ll save that story for another day, though.

The point is that, in spite of my initial misgivings, I’ve become a fan of my Fitbit. It hasn’t made me thinner (or taller, for that matter). But it’s motivated me to be just a little bit more active, and it’s made me more aware of how one factor — such as getting plenty of exercise — can impact others, like the quality of my sleep.

Full disclosure: I am in no way affiliated with Fitbit (apart from being owned by one) and I was not compensated in any way for this post. Except for those blue suede shoes, of course. 😉