You only get one shot at it

I was corresponding the other day with Joe at Seldom Seen Photography about the view from the top of Notre Dame cathedral (check out the last image of his beautiful post).

It’s long been my favorite perch from which to survey — and photograph — Paris. But during my visit last September I was dismayed to find the entire viewing gallery covered in fine mesh.

The docent explained that just three weeks earlier a tourist had either dropped or thrown something, and that the falling object had almost hit a visiting dignitary in front of the church.

On the bright side? I now know how it feels to be a louse stuck under a hairnet. Still, I was frustrated that one person’s selfish/careless act had ruined it for the rest of us. And poor Joe was even more disappointed:

I regret not going up when I was there about 6 or 7 years ago,” he wrote. “I thought the line was too long at the time. Just goes to show that we shouldn’t always assume we will be able to come back later and get the shot.”

I told Joe about an even more distant past in which the towers of Notre Dame were open to the sky, and you could actually touch the gargoyles. (In hindsight, I wish I’d taken more — admittedly weak and grainy — photos. But this one’s for you, Joe.) 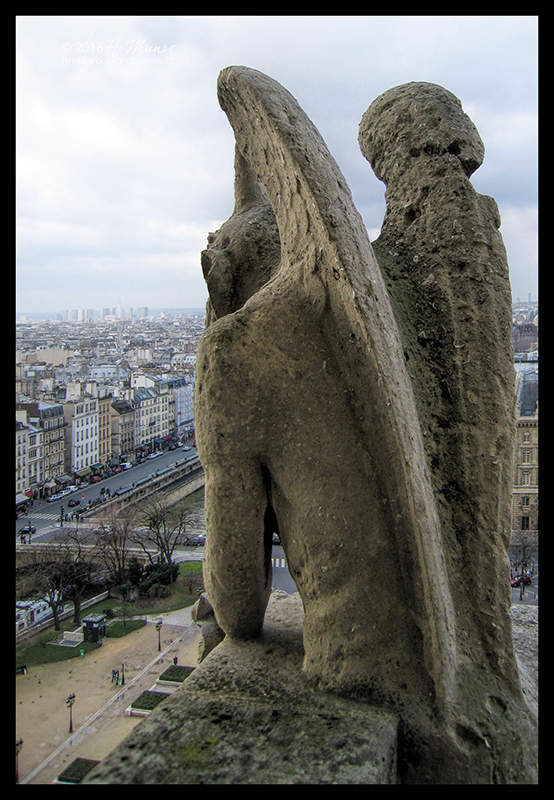 Which leaves me with the metaphorical lesson from the towers of Notre Dame: Whether we realize it consciously or not, we only ever get one shot. The moment will never repeat itself. And anyway, there are no guarantees. So seize your opportunity. Stand in line. Crawl on your belly. Brace against the rain. Whatever it takes, be present in the moment — and give it your best shot.