Esteban and I had excellent timing in leaving our house for a condo, it seems: This winter has been among the coldest and snowiest I remember in a long time. It’s been wonderful not to worry about shoveling, or parking restrictions, or raking snow off the roof.

Still, I did feel a bit guilty this morning when I heard the young men (once again) plowing our parking lot. “Thanks so much for doing this,” I said to one of them as I left for work. “It’s no problem,” he replied — though I heard it as “snow problem.” Indeed.

Anyway. The absence of snow-related chores has helped me better appreciate the white stuff, even when it snarls traffic. A couple of weeks ago it took me 15 minutes just to get on the freeway. (Not moving, so totally safe to activate the dash-cam and show you these white-out conditions.) 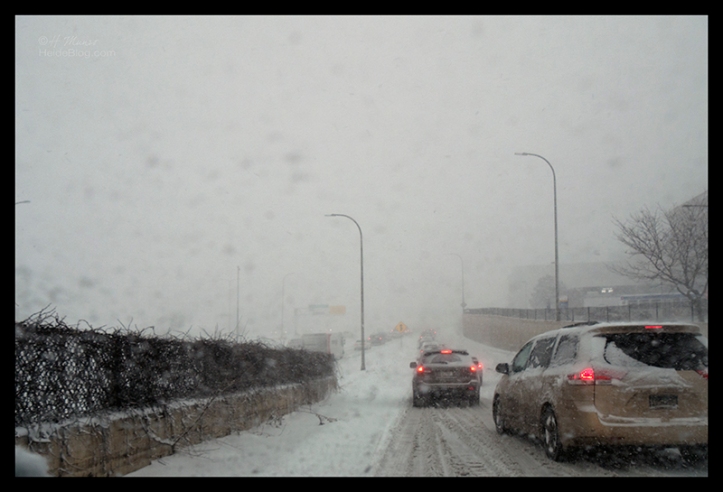 Still not moving (but leaving lots of room in case someone gets overconfident and spins out).

As usual, winter brought out the best in Minnesotans, like this pedestrian who left his perch on the curb to push a stranger around the corner. 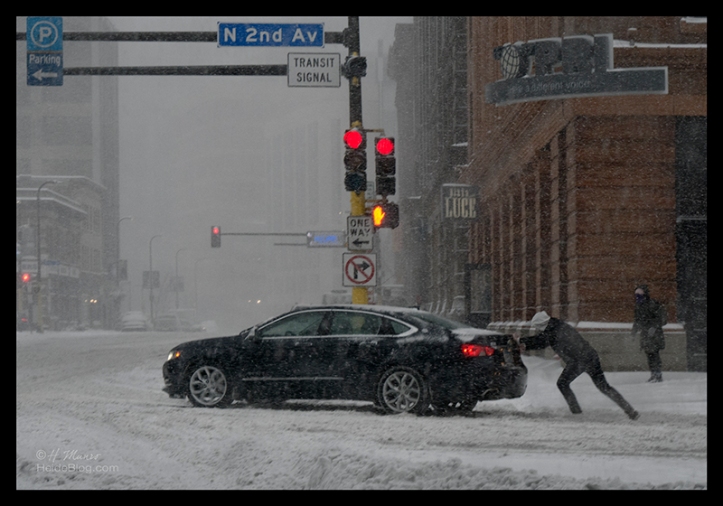 I felt bad for the woman who tried to follow me up this hill, though: Without four-wheel drive, no amount of pushing was going to get her over that incline.

The following morning I headed out for a stroll. It was still dark, because … well, it’s still dark before I go to work. All the better to capture the eerie glow of incoming headlights on the road. 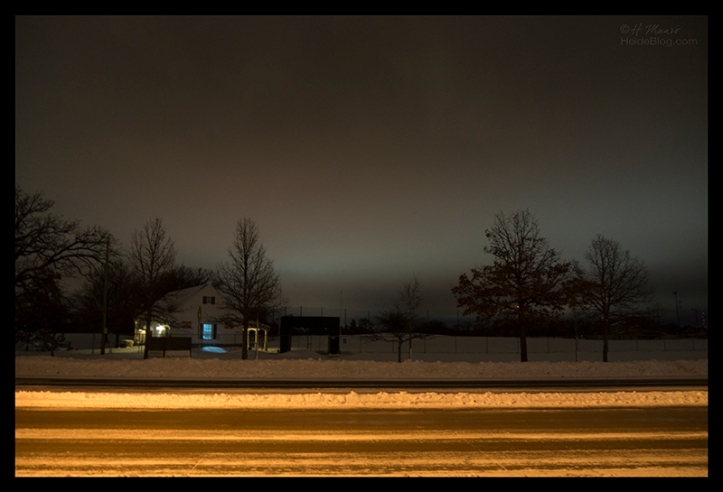 Also eerie? How the sidewalk ends, with the tacit suggestion that you step into the path of those headlights.

I didn’t have to work. But I did have a doctor appointment downtown, so I dutifully covered as much flesh as possible and headed into the elements. The drive there wasn’t too bad, actually. But the drive back? Well, it would have been faster to get out and walk. 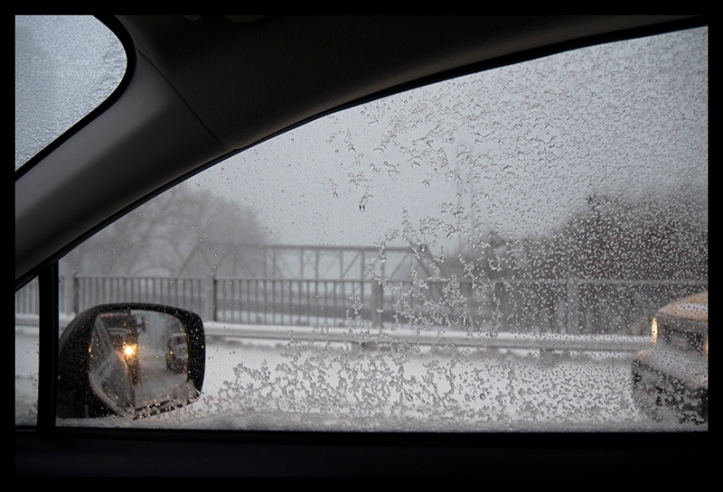 So I did. I was practically alone on the Stone Arch bridge as I took in the wintry scenery. 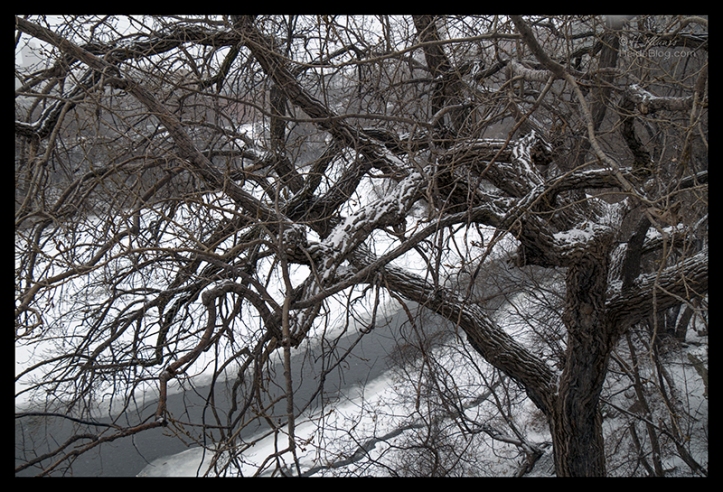 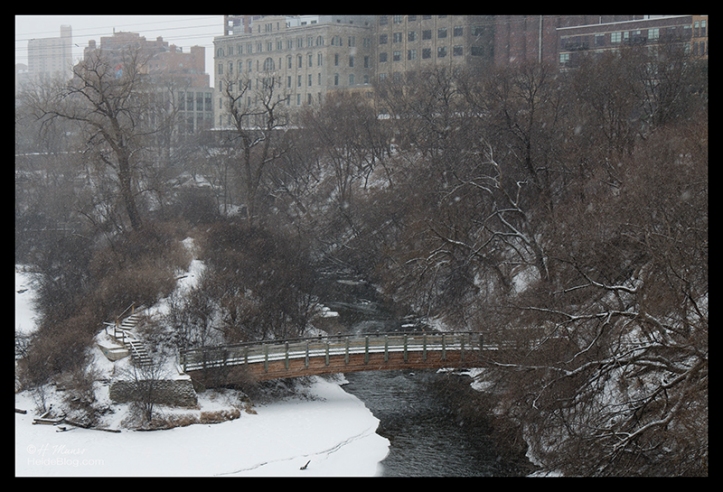 But then a jogger went by … and turned around.

I felt apprehensive as he approached me. His face was completely covered, and there was no one else around. I instinctively rehearsed my exit strategy.

“Can I ask you a big favor?” the lanky figure said as it approached. “Can you take my picture?” I looked at his frost-covered eyelashes and kind eyes. This man was not a threat.

His name was Shane, and he was a college-basketball star in his senior year when he found out he had Multiple Sclerosis (MS). “I just went blind in one eye one day,” he said. But he was doing better now, thanks in part to a new drug.

He had all the hope and joy of someone who’s been given a second chance … and he wanted to remember this moment. I was happy to photograph him running, relishing a simple act most of us take for granted.

I told him about someone dear to me who is also fighting MS. “What’s her name?” he asked. “I’ll pray for her.” And I believed him.

As I walked back to my car, I could hear my friend Dan playing the carillon in the tower high above City Hall. I couldn’t make out the tune but it didn’t matter. The bells were a perfect soundtrack for this arctic-cold city full of warm hearts and kind strangers. 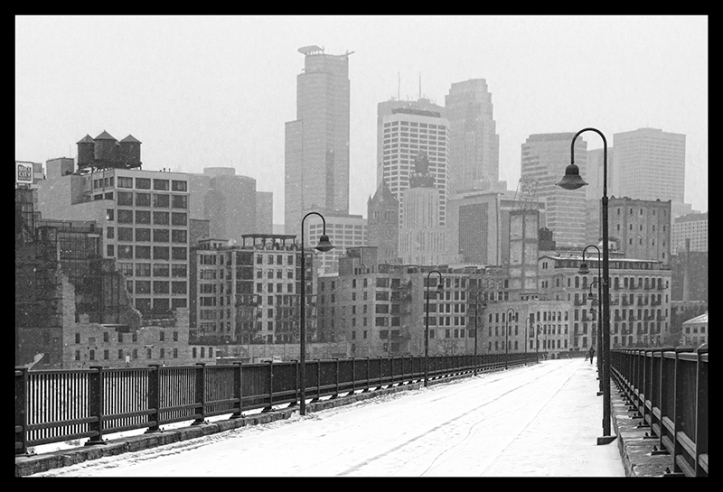