A second Wednesday in Paris

I woke up feeling much better than I did yesterday, so I got up for an early-morning walk. It didn’t take long to realize that I didn’t look quite as good as I felt: Even the pigeons were giving me dirty looks.

… or from playing with the mooring rings that line the quais along the Seine.

After running home for a shower and some breakfast, I set off to explore on foot.

Today’s first destination was the Passage du Grand Cerf, which my photo coach Sophie had recommended last week. Like the Galeries Vivienne and Véro-Dodat, the Grand Cerf is a remnant from a time when shopping was an event. From the street pavers to the wrought-iron ceiling, everything felt as if it had been frozen in time. 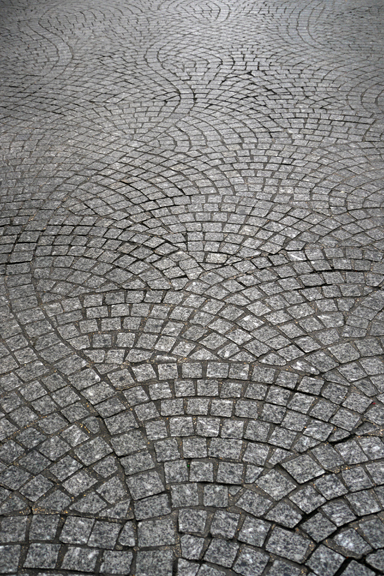 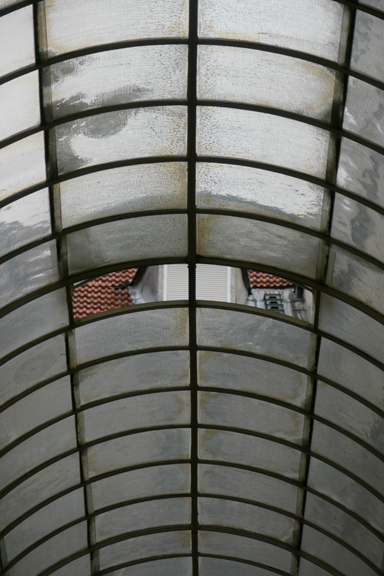 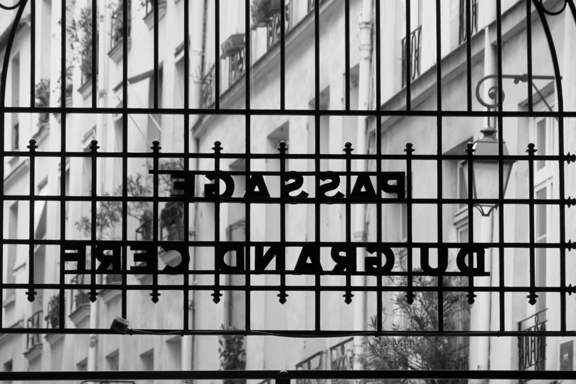 I paused for several minutes to watch a restaurateur update the day’s menu. 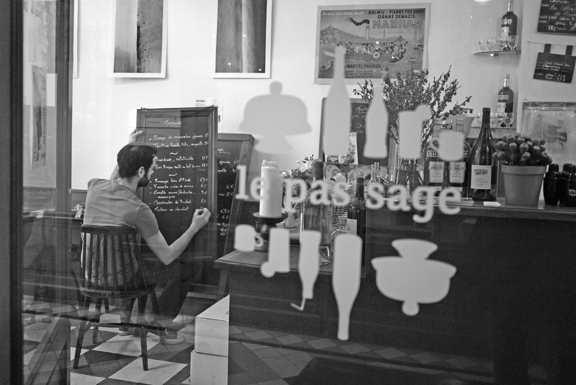 … and I enjoyed watching a couple of Brits do some shopping. I don’t know why they didn’t both go in the store, but it was fun watching their interactions through the window. 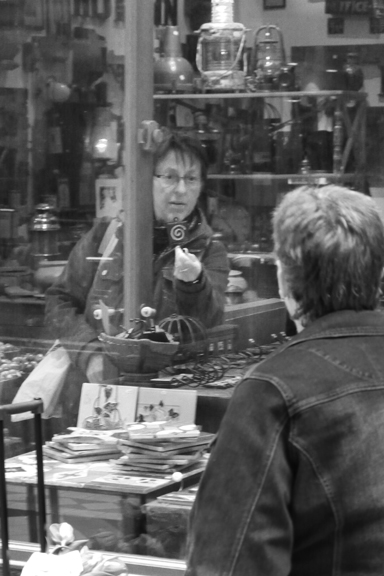 Soon it was time for my second destination: The Louvre.

My friend Amnon had been given a very rare opportunity to draw inside the Louvre between 9:30 and 1:30, so I set out to find him at about 12:30.

I think he was disappointed with his progress—he’s meticulous, and the constant din was distracting—but I thought his drawing was gorgeous.

I took a few shots for him as souvenirs and went off to explore the museum.

What I can say about the Louvre? It’s huge. It’s as beautiful as the art it houses. And it’s full of wonderful surprises. Like the other artists who were also working in the galleries … 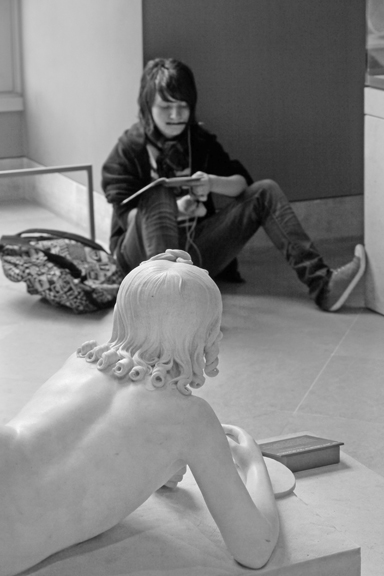 … and the heavily armed guard who locked eyes through my viewfinder … 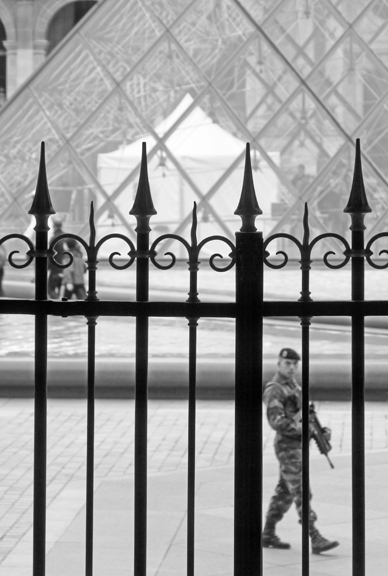 … to the crowd that surrounded the Mona Lisa.

I thoroughly enjoyed seeing some of the art and architecture … 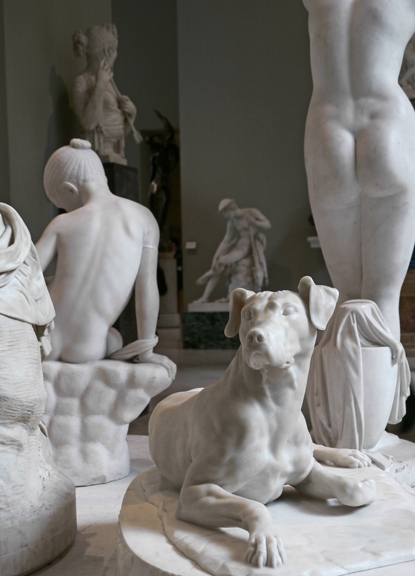 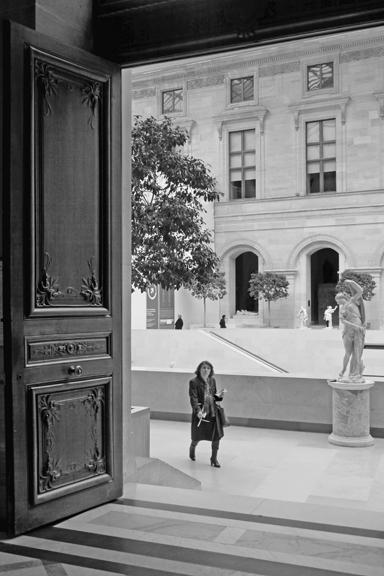 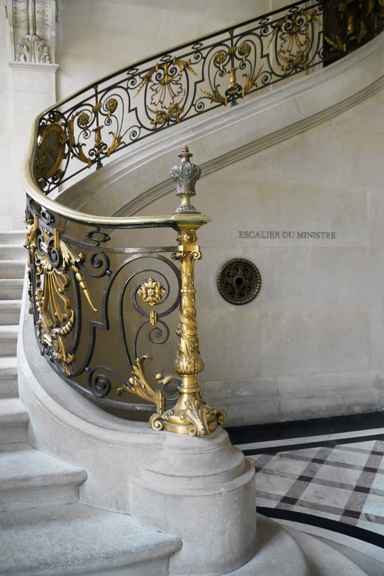 … and the Apple store that sits right next to the Pyramid. 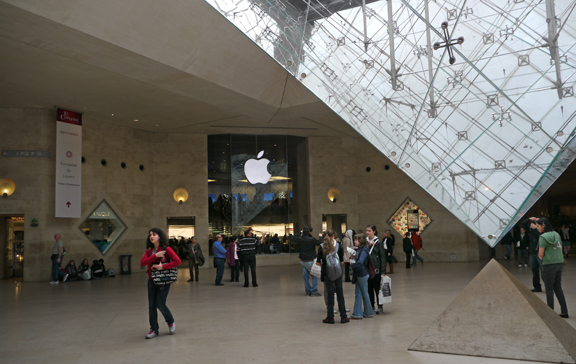 But my favorite thing was watching people’s reactions as I played with abstract compositions. You’d think they’d never seen anyone lie down on a staircase before! 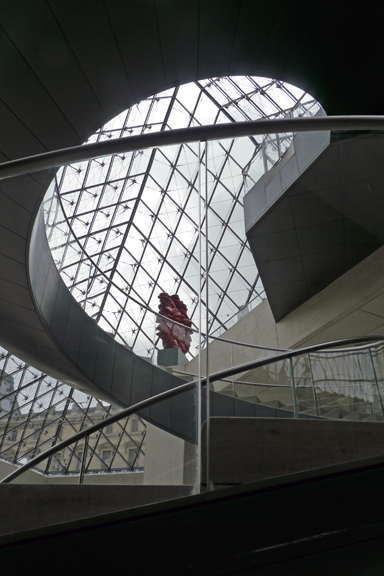 Alas, the shadows were getting long. It was time to go home and rest my feet before heading out for dinner with Amnon and his friend Matan.

Well, that pretty much wraps up my second (and last) Wednesday in Paris. I’ll be back tomorrow …